Record high stock and bond prices are flashing danger signs to former Reagan White House Budget Director David Stockman. Stockman contends, ‘I don’t think we are going to have a liquidity crisis. I think it’s going to be a value reset. I think there is going to be a jarring downward price adjustment both in the stock market and in the bond market. This phantom or phony wealth that has been created since the last crisis is going to basically evaporate.’
So, what asset is safe? Stockman says gold and goes onto explain, ‘I think the time to buy (gold and silver) is ideal. Gold is the ultimate and only real money. Gold is the only safe asset when push comes to shove. They tell you to buy the government bond, that’s a safe asset. It’s not a safe asset at its current price. I am not saying the federal government is going to default in the next two or three years. I am saying the yield on a 10-year bond of 2.4% is way below of where it’s going to end up. So, the only safe asset left is gold. This crazy Bitcoin mania has drained off what would otherwise be a demand for gold. . . . When Bitcoin collapses, spectacularly, which it will because it’s sheer mania in the markets right now. When it collapses, I think a lot of that demand will come back into gold, as well as people fleeing the standard stock and bond markets for the first time in 9 or 10 years.’

This post was published at David Stockmans Contra Corner on December 27th, 2017. 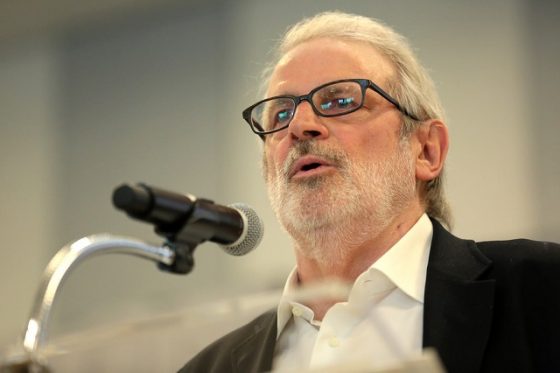 David Stockman, former Michigan representative and Director of the Office of Management and Budget under President Reagan, destroyed the Russian collusion hoax with incredible clarity in his latest column on Tuesday.
From Antiwar.com, ‘The FBI’s Perjury Trap of the Century’:
If you were a Martian visitor just disembarked from of one of Elon Musk’s rocket ships and were therefore uninfected by earth-based fake news, the culprits in Washington’s witch-hunt de jure would be damn obvious.
They include John Brennan, Jim Comey, Sally Yates, Peter Strzok and a passel of deep state operatives – all of whom baldly abused their offices. After Brennan had concocted the whole Russian election meddling meme to sully the Donald’s shocking election win, the latter three holdovers – functioning as a political fifth column in the new Administration – set a perjury trap designed to snare Mike Flynn as a first step in relitigating and reversing the voters’ verdict.
The smoking gun on their guilt is so flamingly obvious that the ability of the Trump-hating media to ignore it is itself a wonder to behold.
After all, anyone fresh off Elon’s rocket ship would learn upon even cursory investigation of the matter that the National Security Agency (NSA) intercepts electronically every single communication of the Russian Ambassador with any person on US soil – whether by email, text or phone call.

This post was published at The Daily Sheeple on DECEMBER 6, 2017.

David Stockman joined Boom Bust to discuss the massive storm that is building and about to slam into Wall Street. During the discussion Stockman reveals what he believes is ahead for the stocks in the market and the economy.
The interview began with the Boom Bust host asking the acclaimed author about his concern surrounding a government shutdown. David Stockman began ‘we’re in the midst of the biggest political train wreck in modern history… There will be no governance in Washington. There will be no tax bill, stimulus or infrastructure.’
‘We’re heading for an expiration of the debt ceiling and running out of cash that will create an enormous crisis by August or September. They’re not going to be able to cope with it.’

This is a syndicated repost courtesy of The Daily Reckoning. To view original, click here. Reposted with permission.
David Stockman joined Fox Business on Varney & Co. to discuss why he believes the current markets are setting up investors for a big drop.
Asked for an explanation regarding his call that the S&P 500 faces a 35% fall and whether the market was seeing the start, Stockman fired away at his logic and reasoning. ‘I think it will happen any day. Because we’re a country that’s out of control.’
Varney, quick to draw conclusion noted that the economist had been making such claims for years. Stockman rebutted, ‘I could have said that in February 2000 and the market dropped by sixty percent. I could have said that in November 2007 and the market crashed. I am old enough to remember October 1987.’

This post was published at Wall Street Examiner on June 17, 2017.

David Stockman joined Bloomberg Markets to discuss President Donald Trump’s latest budget projections. After the White House and current Office of Management and Budget director Mick Mulvaney released various statements on the budget proposal viability conversations already began within the GOP and Congress.
When prompted by host David Gura over his thoughts, even reflecting on former Treasury Secretary Summers comments that the budget is ludicrously optimistic, David Stockman did not mince words speaking on Washington.

This is part I of a 3-part series introducing Plunger’s ‘Trade of the Year’. This section gives a review of the oil price from 1946 to present explaining the essential forces which powered its price through various bull and bear markets. It explains how we ended up where we are today in the oil market. Part II will explore the macro forces driving today’s economy which lays the groundwork for introducing my trade of the year in part III.
To acquire a broader view of oils path over the past century I highly recommend the following resources on the oil market. Daniel Yergin’s ‘The Prize’ is an in-depth review of the history of oil up to the First Gulf war. It is indispensable in understanding the growth of the industry. Other books provide entertaining color to the industry by reviewing the swashbuckling nature of the early players who formed the industry as independents. I recommend ‘The Big Rich’ by Bryan Burrough and JP Getty’s autobiography ‘The Way I See It’. Finally, David Stockman’s ‘The Great Deformation’ is essential reading as it corrects all the false economic narratives of the past which have been masquerading as truth.

The following video was published by FutureMoneyTrends on Dec 18, 2016

The following video was published by VictoryIndependence on Oct 31, 2016

The following video was published by ChrisMartensondotcom on Oct 2, 2016
David Stockman, former director of the OMB under President Reagan, former US Representative, and veteran financier is an insider’s insider. Few people understand the ways in which both Washington DC and Wall Street work and intersect better than he does.
In his upcoming book, Trumped! A Nation on the Brink of Ruin…And How to Bring it Back, Stockman lays out how we have devolved from a free market economy into a managed one that operates for the benefit of a privileged few. And when trouble arises, these few are bailed out at the expense of the public good.
Stockman brings us his report of what 30 years of politics, degenerative crony capitalism and ‘bubble finance’ have finally wrought. The upheaval and crossroads represented by Donald Trump’s candidacy spell economic disaster or resurgence, depending on the steps America chooses to take from here.

What Big Pharma Won’t Tell You: Plant Derived Minerals For Your Health

Cheap Generic Meds Are Here, Big Pharma Is Hiding Them!

This post was published at The Jimmy Dore Show

What Big Pharma Won’t Tell You: The Key Nutrients For Your Health